Are You Curious about Curious George?

“This is George. He was a good little monkey and always very curious.”

I have read that line more times than I can count. How about you?

Curious George is one of those characters we keep returning to. Just like the boys, he’s cute, sweet, and a bit of a trouble maker. That’s probably why this series has endured for more than 80 years.

In that time, Curious George has been the main character in two book series, many versions of a cartoon show, and a movie. It is a pretty good return for the $1,000 advance Houghton Mifflin paid H.A. and Margret Rey for the first four books.

As is only right, we have lots of questions around this series. After all, we’re curious, too.

Is Curious George a Monkey?

If you’re like me, this question comes as a shock. Ok. Maybe I’m not so observant. Or maybe just not up on my monkey anatomy.

It was my husband (and his vast collection of useless knowledge with which he can answer most Jeopardy questions) who first brought this to my attention when we start reading these books to the boys. I googled it and it turns out to be a well debated question. 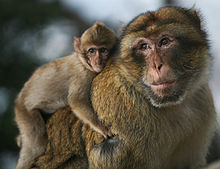 For this question, we headed to the Internet and found the San Diego Zoo’s page on monkeys. (Great zoo if you’re out there with your family!) It turns out there’s only one monkey that doesn’t have a tail—Barbary macaque (also referred to as the Barbary ape because of its lack of a tail, but it is actually a monkey, according to Wikipedia.) While we could see a little resemblance, we were not convinced George was a Barbary macaque.

Digging further, we found this super informative blog post on PoweredByOsteons.org. It not only offered some of the same research we found (I now know so much about monkeys I may be able to compete against my husband in that category on Jeopardy), but also drew a conclusion—it does seem Curious George was an ape (maybe a juvenile chimpanzee). However, when the Reys wrote the series, there was a catch-all term for monkeys. So that’s what they might have meant. Since he’s cute and we love reading about him, it doesn’t really matter.

(In the PoweredByOsteons.org post, you can also find a bit about the history behind Curious George. It is similar to the background included in The Complete Adventure of Curious George (but easier to access if you don’t have the book). Did you know that the Reys escaped the Nazis by biking out of Paris with the manuscript for Curious George on their back?)

Do You Like the Original or New Curious George?

During CJ’s first year, I aimed to buy a book every month (it usually ended up being more) to build our collection and commemorate special events. A Treasury of Curious George was one of the first books I bought. But on his first birthday, he received The Complete Adventures of Curious George from a family friend. It was then I realized there are two versions of Curious George—the original written by H.A. and Margret Rey in the 1930s and the New Adventures illustrated in their style with new stories published in the late 1990s/early 2000s.

And I hate to say it, but I prefer the modern-day version.

I know. You’re supposed to like the original better, but I’m here to help you read more to your kids. And the New Adventures are an easier read.

Reading the original now, it doesn’t seem as bad as I remember, but when the boys were little, these stories felt torturous.

CJ’s favorite of the original stories was Curious George Learns the Alphabet. 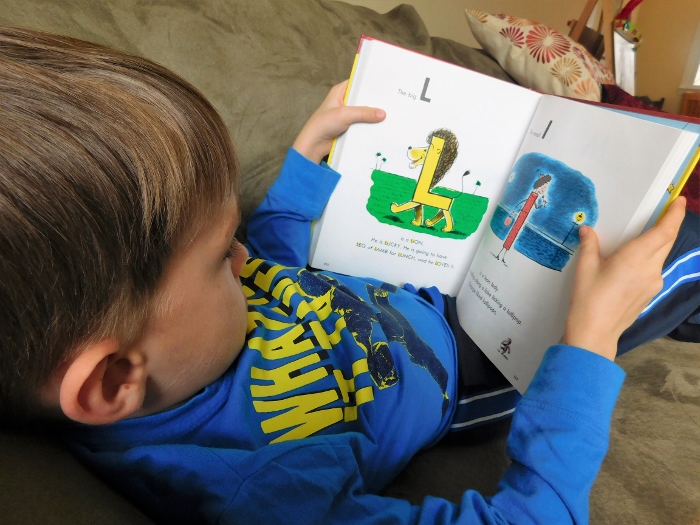 It’s 71 pages. Even George takes a break during the story—twice! We reread it while I was writing this post. He still loves it, but it drags a bit for me. When you read three books a night, 71 pages is too much.

On average the original stories are 54 pages. The New Adventures are all 21 pages.

In the New Adventures, there’s generally one setting per story. George gets into trouble and usually finds a way to turn that problem into something positive. For example, in Curious George and the Puppies, when George tries to pet one puppy, he ends up letting all of them out of their cage. But in the end, he not only helps clean up the mess, but finds the missing puppy.

In Cam’s favorite, Curious George Takes a Train, George switches the numbers on the train status board because he’s trying to help. Though that caused trouble, he also ends up saving a little boy’s toy train and keeping him off the train track. 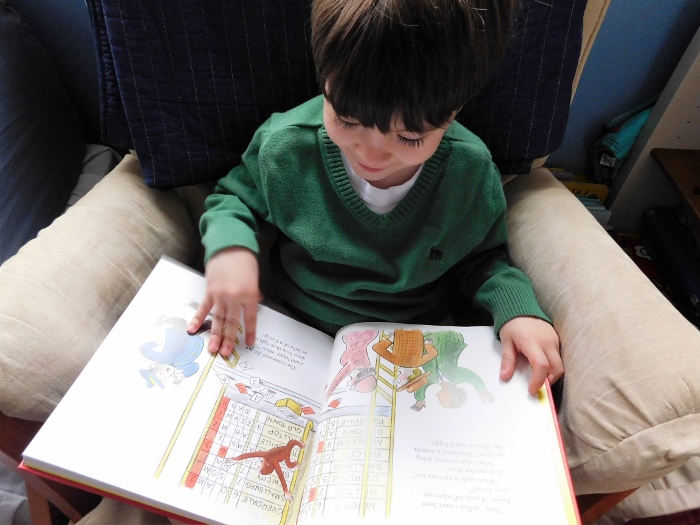 Maybe I’m soft, but the New Adventures show that while you may get into trouble, you can redeem yourself. And there’s a lesson in each one.

On the other hand, the original stories seem never ending… and a bit more sinister. In the first story, Curious George, the Man with the Yellow Hat captures George in a bag and takes him to the “big city” with a gun strapped to his back. Later, after some pipe smoking, George plays with the phone and accidentally calls the fire department. When he doesn’t answer their greeting… ummm… he is a monkey, the police come and “shut him in a prison.” As an adult, I find humor in some of these things, but as a parent I’m not used to seeing—or explaining—such things while reading children’s books.

While there are good basic lessons in the original stories—don’t prank the police or fire department—the consequences are sometimes harsh, not something a child may understand, and, inevitably, George escapes moving onto more mischief.

That said, I have some fond memories of reading these classics. Curious George Learns the Alphabet reminds me of how obsessed CJ was with the alphabet. We also had a fun bath time with boats made out of newspaper inspired by Curious George Rides a Bike.

What’s the Opposite of Curious George?

In this parody, Furious George is an ape…though the “man in a funny hat” keeps referring to him as a monkey. Everyone corrects him and says monkeys don’t have tails. (Obviously, Mike has considered our first question, too.) The “man in a funny hat” isn’t as nice as the man with the yellow hat. Throughout the story, he tries to make money off George. You’ll recognize some familiar scenes—a bunch of balloons taking someone away, a broken bicycle, and a rocket headed to outer space—except he doesn’t take it all as well as Curious George. This George is furious!

My husband went to high school with Mike Rex, which was how I was introduced to his writing. He has also written parodies of Margaret Wise Brown and Clement Hurd’s Goodnight Moon in Goodnight Goon and Ms. Brown’s Runaway Bunny in Runaway Mummy. CJ was a little young when we got copies autographed for him, but he loves them now! And Mike has a series for when he gets a little older: Fangbone!

How Can You Go Beyond Reading Curious George?

I could go on and on about Curious George. But I’ll let you do some exploring on your own. Please share what you find! Or use some of these activities to go beyond reading Curious George with your little ones.

Tell us what your favorite Curious George story is and the adventures you and your kids have with them.