Celebrating the Holidays (and Every Day) with the Nutcracker

Our family’s favorite holiday tradition is experiencing The Nutcracker ballet. Our tradition began when my husband and I would get tickets each December to the New York City Ballet’s George Balanchine’s The Nutcracker®. Now, even though we no longer live in New York City, our family makes the trip each year to see this special performance in Lincoln Center. 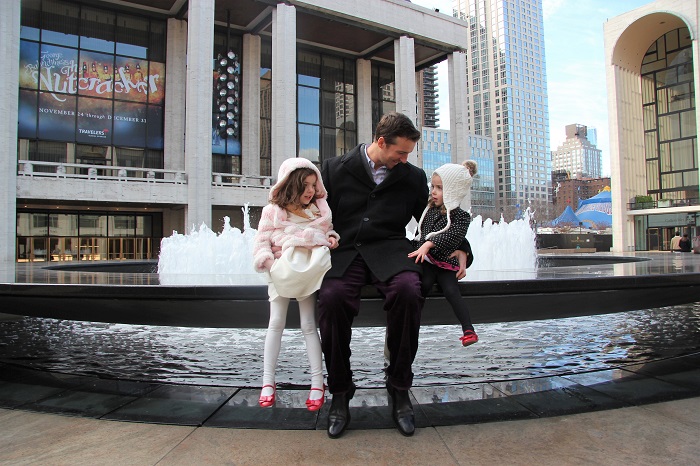 This year was Winter’s first live Nutcracker experience. She was well prepared for her inaugural visit thanks to our ever-growing collection of favorite Nutcracker books for children, as well as her big sister’s ability to recall (and regularly perform at home) just about every step of the famous choreography. The girls dramatically enact the Nutcracker year round in our house, but it takes on special meaning at Christmas time.

If you’re unfamiliar with the ballet, which was composed by Russian composer Pyotr Ilyich Tchaikovsky, this synopsis is based on the New York City Ballet’s rendition, choreographed by George Balanchine.

On Christmas Eve, the Stahlbaum children, Marie and Fritz, are filled with excitement. Their parents have decorated the Christmas tree, and a party is about to begin. Soon, neighbors fill the room, and the adults and children admire the tree and dance. The dramatic arrival of Herr Drosselmeyer, Marie’s godfather, introduces magic to the party with a performance by life-size wind-up dolls, gifts, and tricks. Marie receives a special gift from her godfather: a nutcracker. Though jealous Fritz breaks the nutcracker, Drosselmeyer mends it with his handkerchief. As the party ends, the guests depart and Marie says goodbye to Drosselmeyer and the handsome nephew who accompanied him.

The house is quiet, but soon Marie appears in search of her nutcracker. She finds him under the tree and falls asleep with him in her arms on the living room sofa. When her mother discovers her, she wraps her in her shawl to keep her warm.

Drosselmeyer returns to properly fix the nutcracker and sparks another magical scene. The Christmas tree begins to grow to a startling height. The toy soldiers and Marie’s beloved Nutcracker are suddenly both alive and as large as she is. The Nutcracker leads the soldiers in a battle against the mice. Marie helps him defeat the Mouse King by throwing her shoe at him, distracting him momentarily for the Nutcracker to strike. The scene then disappears. The Nutcracker is transformed into a handsome prince that very much resembles Drosselmeyer’s nephew. Marie and the Prince begin walking out into the snowy forest before them. Snow falls and snowflakes dance around them as they walk towards the Christmas star.

Marie and the Prince arrive in the Magical Land of Sweets where the reining Sugar Plum Fairy greets them. The Prince recalls the story of the battle with the mice, and the Sugar Plum Fairy begins a celebration of sweets for Marie. The dancers include hot chocolate, Arabian coffee, Chinese tea, candy canes, marzipan, Mother Ginger and her Polichinelles, beautiful flowers, and performances by the Sugar Plum Fairy and her Cavalier. After a final waltz performed by all the sweets, a reindeer drawn sleigh takes off with the Prince and Clara as they wave goodbye.

Behind the Scenes of The Nutcracker

In addition to this year being Winter’s first Nutcracker ballet performance, it was extra special. A friend who works in the costume studio for the ballet met us before the performance to show us the space where the wardrobe department creates and repairs the costumes for the New York City Ballet.

She showed the girls two new costumes—for the Sugar Plum Fairy and the Cavalier—all intricately stitched with sparkling gems and candy buttons. It was fascinating to see these beautiful works of art up close and admire the amazing details. 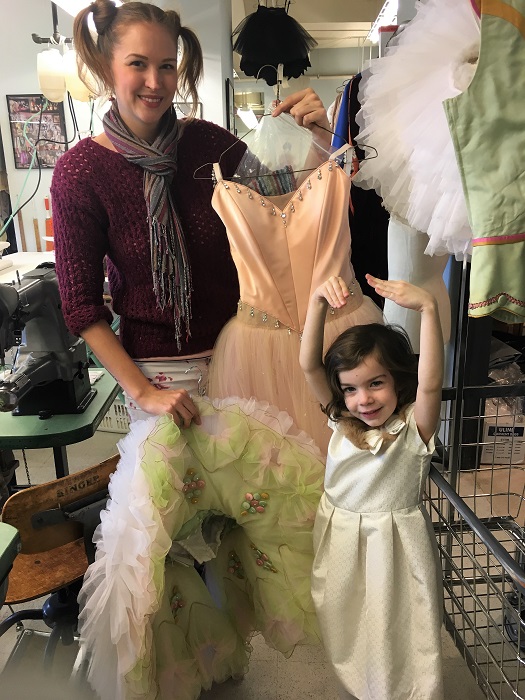 This photo of our generous friend with Willow shows the Sugar Plum Fairy’s two costumes. When we saw them on stage during the performance, we were so excited and totally captivated knowing the sparkling came from all the little jewels. Willow and Winter each got to take a jewel home from the studio.

Because we are so partial to our favorite version of the ballet, we particularly love The Nutcracker written by the New York City Ballet and illustrated by Valeria Docampo. This book’s storyline follows the choreography of George Balanchine’s production, and the art is based on the scenery, backdrops, effects, and costumes of the production. This book helps us relive the Nutcracker at home. 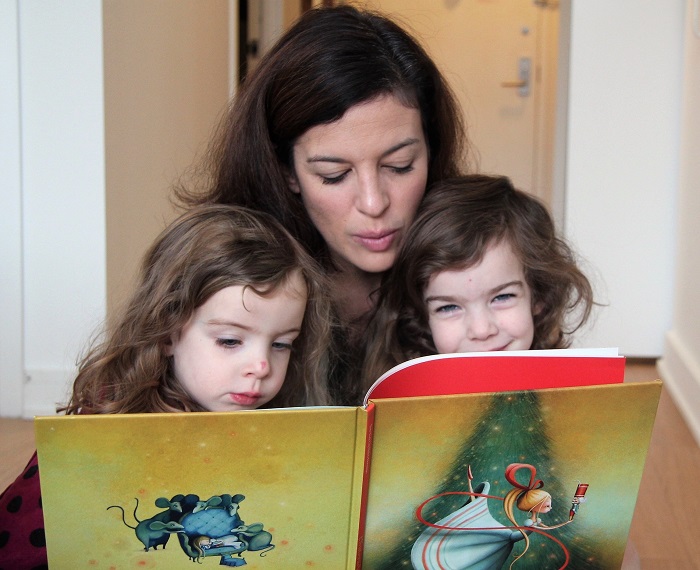 This year we added The Nutcracker in Harlem to our library. Written by by T. McMorrow and illustrated by James Ransome, the story takes place on Christmas Eve in New York City during the Harlem Renaissance. Marie feels out of place during the festivities as her family and the party guests dance and sing. Then, a special gift from her Uncle Cab—a drummer boy nutcracker—and a magical dream inspires her to find the music that’s inside her. 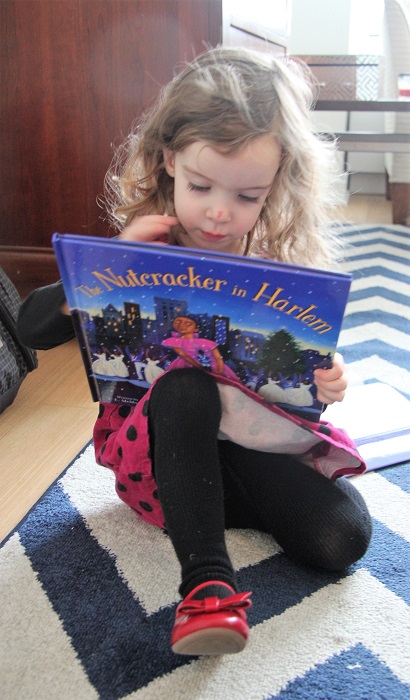 Another new Nutcracker-inspired favorite for the girls this year is Waltz of the Snowflakes by Elly MacKay. In this wordless picture book, the illustrations beautifully tell the story of a girl who is given ballet tickets by her grandmother. The weather is rainy and cold, and the dress the girl puts on doesn’t suit her. We infer that she’d rather not go into the city. But when the curtain opens, the girl is captivated. The reader sees the story of the ballet unfolding and, alongside, a friendship blossoming between the girl and another reluctant theatergoer. We have revisited this book many times since adding it to our library. 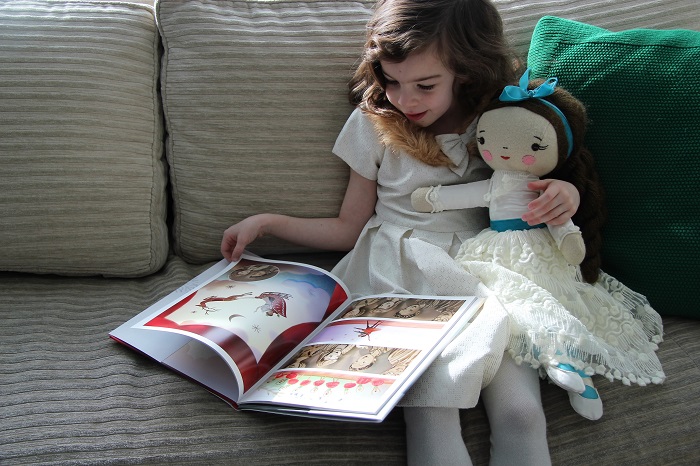 For the very youngest Nutcracker fan, we also recommend The Nutcracker: A BabyLit Primer by Jennifer Adams and illustrated by Alison Oliver. This sturdy board book highlights the movement of the ballet for the littlest readers. Winter’s favorite pages showcase mice prancing and snowflakes swirling. Like all of the BabyLit primers, this book is a manageable introduction to the Nutcracker for babies. 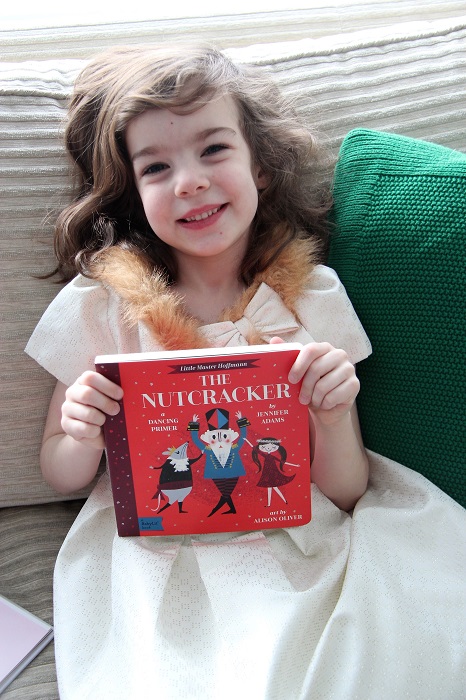 One of the most wonderful benefits about reading different versions of the same story is seeing how similar and different the stories can be, and how they are brought to life by the writers and illustrators who imagine them. We love to compare and contrast these stories, as well as other Nutcracker stories in our library.

Celebrating with the Nutcracker

The second act of the Nutcracker is so magical that we decided to take inspiration from it for Winter’s second birthday party. The Land of Sweets and the performances make the perfect menu for an afternoon dessert party. To celebrate, we rented a big dance studio, wrapped its columns in red ribbons to look like candy canes, and filled a big table with desserts straight from Act II. 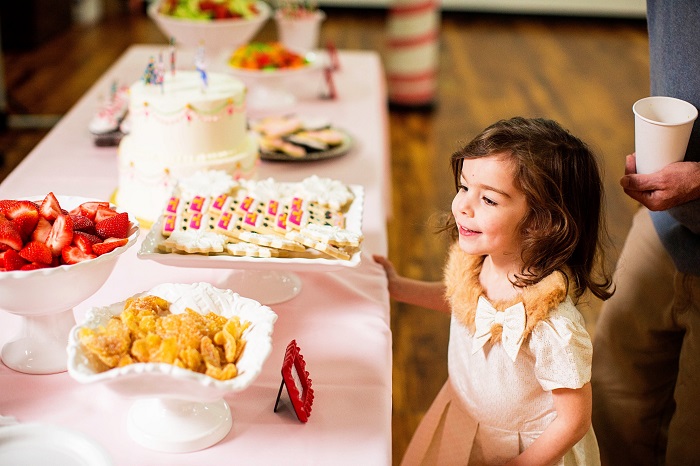 We listened to the score of The Nutcracker while we sipped hot chocolate and green tea, ate marzipan and candied ginger, enjoyed cookies iced like the costumes of the Sugar Plum Fairy and Dewdrop from the Waltz of the Flowers, and cut a cake adorned with characters from the ballet. 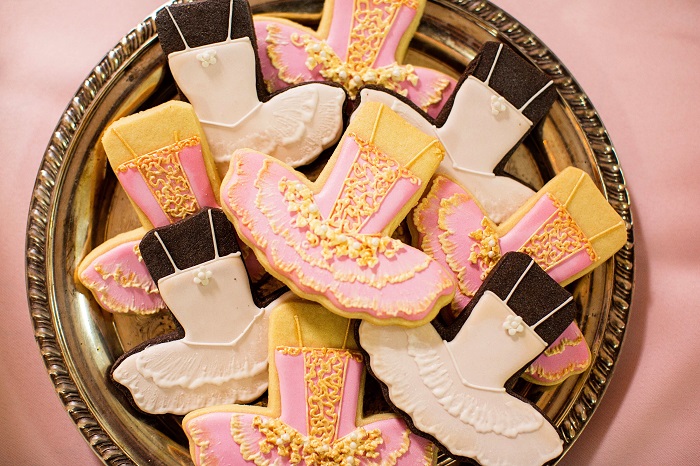 The birthday girl slept through a good part of her party, but she particularly enjoyed the Candy Cane lollipops we gave as favors. 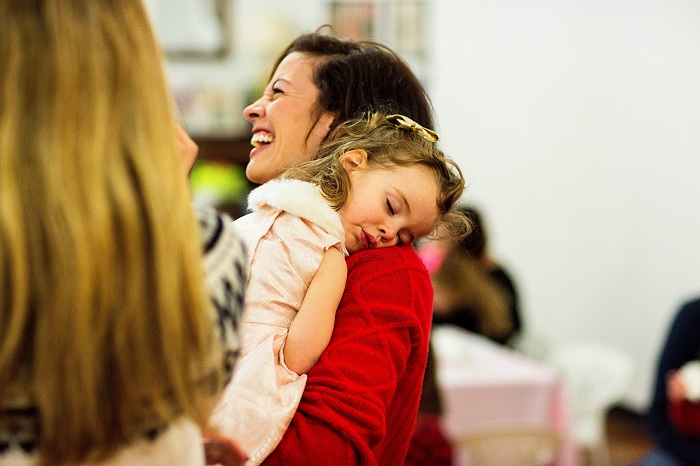 (All party pictures are by Melissa LaCouture.)

Listening to the Nutcracker

When we’re not watching, dancing, reading, or partying to The Nutcracker, chances are we are listening to it. Listen along with us with these two favorites!

George Balanchine’s The Nutcracker: Music from the Original Soundtrack features the original production and matches the New York City Ballet’s production of The Nutcracker. The girls love envisioning what is happening in each piece. Willow’s favorite is “Candy Cane,” and Winter’s is “Mother Ginger and her Polichinelles.”

The Nutcracker Suite by Duke Ellington and His Orchestra reimages the original Tchaikovsky’s pieces in jazz. Each song is totally unique from, but yet familiar to the original—another fun opportunity to compare and contrast as well as learn about another genre of music. Our favorite is “Sugar Rum Cherry,” reimaged from the Dance Sugar Plum Fairy, but the entire album is a gem. 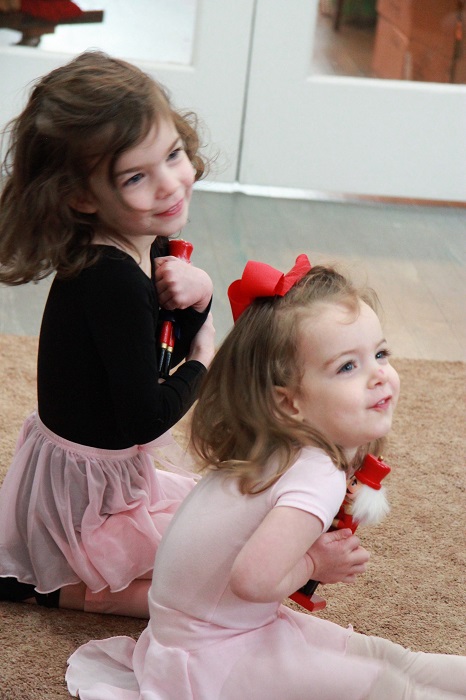 We hope you enjoy The Nutcracker as much as we do—during the holidays or any time of the year.