A Day at the Museum

The boys have so many toys that early on we decided to give them experiences for their birthdays instead of toys. When CJ was four, the tradition started with a trip to “the big city,” which for us is New York City. We went in by train (which was a treat unto itself) and then ventured to Times Squares, the big Toys ‘R’ Us, and lunch. This weekend, for Cam’s fourth birthday, we also went into the city. But this time we drove and went to the American Museum of Natural History.

What a treat! First, it was fun to revisit a museum that we remember from our childhoods. (My husband and I agree there seems to be more mood lighting than we remember as kids. Was the Blue Whale always in a darkened room?) But seeing the boys take it all in was fascinating.

CJ would race through an exhibit until something caught his attention. Then he was glue to it. Most of it was the interactive parts. In the special exhibit on Crocs, it was the croc locator touchscreen and Croc Talk “soundboard,” where you could hear sounds crocs make when they’re hungry, see a friend, sense danger, and more. In Dinosaurs Among Us, he wanted to get all the stamps (I’m sure exactly what the curator intended—NOT), sit in the nest, and play the Will It Fly? interactive game. 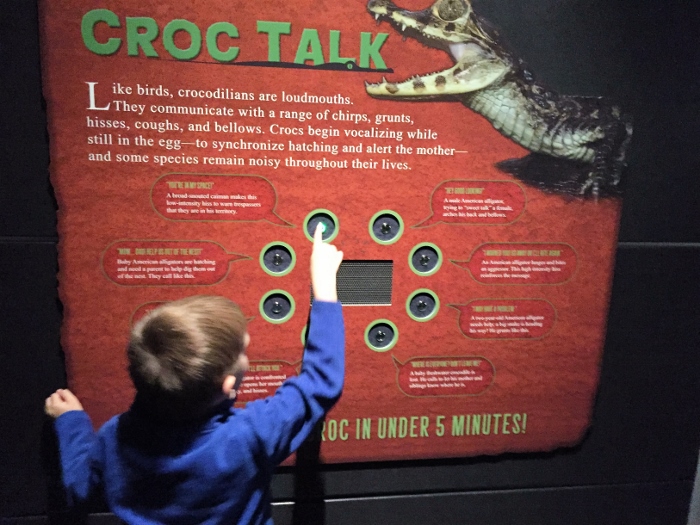 Cam took more time overall. He entered slowly, looking around and absorbing. Of course, he wanted to touch everything. It was his first question when he saw the Tyrannosaurus rex. (I feel like we’ve seen a Curious George episode where something similar happened. Not sure the real life event would end as happily.) He learned there were things you could touch and others you could only look at. 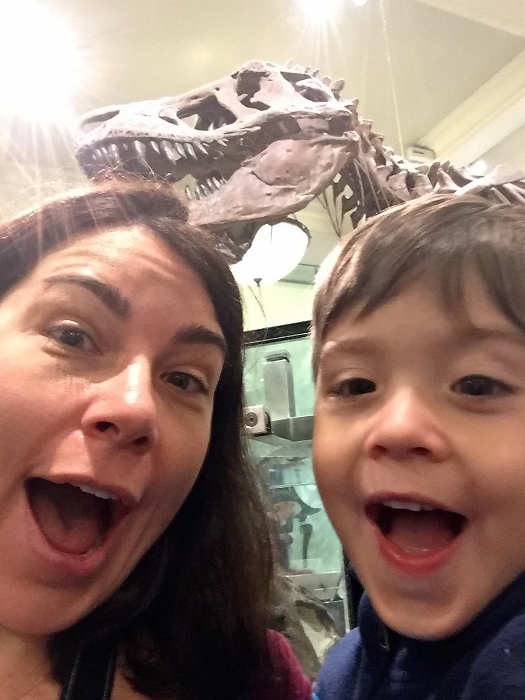 Continuing Our Museum Learning at Home

On our way home, I asked what their favorite parts were. Cam’s was no surprise—the dinosaurs (and the elevators). CJ’s answer was not what I expect, but it was what he talked about all day—the space stuff. Maybe it was because it was the first thing we saw and because we saw Dark Universe in the cool Hayden Planetarium. But he continued to want to return to the space exhibits all day. With these interests in mind, we read two books that night to continue their thinking and learning.

The Berenstain Bears’ Dinosaur Dig
Though you probably weren’t expecting a book about the Bear family from Jan and Mike Berenstain, it was just right for Cam. The Bears also visit a museum and are taken by the dinosaur skeletons. Professor Actual Factual explains how the dinosaur bones were found and introduces to a few types. (The next day we revisited another favorite, The Big Book of Dinosaurs, that features all kinds of dinosaurs.) Brother and Sister become obsessed with dinosaurs and soon have books, models, and kits all over the house. Of course, the boys now want their own dinosaur models, too.

On The Moon
We actually saw this Usborne book at the museum, but already had it at home. On the Moon by Anna Milbourne and illustrated by Benji Davies, is about what it is like to go to the moon from the rocket ride to roaming it. A little basic for CJ, it still was a good reminder of everything he saw. I’ll, of course, be on the lookout for more books about space.

Finally, we went through Exploring the Museum of Natural History: A Children’s Guide with Pictures to Color, which Cam had gotten for his birthday to represent the adventure that was his gift. We went through it and checked what we had seen. We also watched The Night at the Museum, which gave us another opportunity to note what we saw and what we still needed to.

Tips for Your Next Museum Trip

Needless to say, we still have lots to see! But it was a great first visit. Our brains were full and bodies tired. We’ll be back. And I made a few notes to help us on our next visit. I hope these help you when you visit a museum, whether the American Museum of Natural History or another.

Most of all have fun! And remember to reinforce everything your kids learned with some books! (If you have any suggestions for dinosaurs and space books, please comment. Share your museum tips, too.)